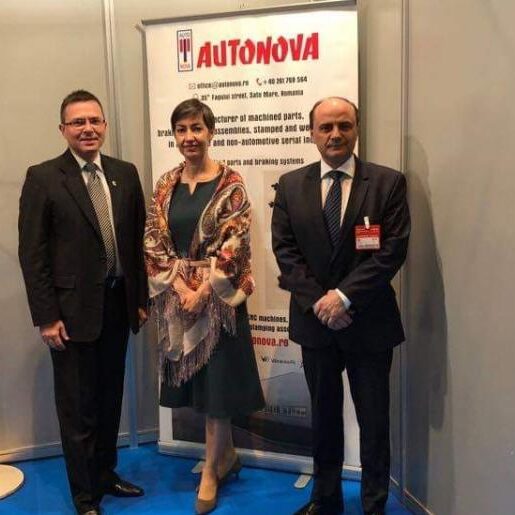 Between 13-16 March AUTONOVA attended the 2019 edition of the Motortec Automechanika International Fair in Madrid, organized in the capital of Spain at the Feria de Madrid exhibition center, where our company was represented by Mr. Ciprian Dan COSTEA, PhD, Vice-Chairman of the Board of Directors and Mr. Cristian Dalis SUTEU, General Manager.

At our booth at the Motortec Automechanika International Fair in Madrid, we had the opportunity to welcome potential new customers and suppliers, with whom we held talks on possible new partnerships. At the same time, we were honored to have at our booth the visit of Mrs. Iulia Schnecker, Minister-Counselor for Trade and Economic Affairs at the Embassy of Romania in the Kingdom of Spain.

At the same time, as a result of the invitation received from the Embassy of Romania in the Kingdom of Spain, AUTONOVA representatives attended the Romania-Spain Business & Investment Forum, an event dedicated to the development of economic relations and businesses between the two countries. The moment was marked by the presence of top representatives such as: Mrs. Xiana Mendez – State Secretary for Commerce at the Ministry of Industry, Commerce and Tourism of Spain, Mr. Stefan Radu Oprea – Minister for the Business Environment, Commerce and Entrepreneurship of Romania, Mr. Jose Luis Bonet – President of the Spanish Chamber of Commerce, Mr. Mihai Daraban – President of the Romanian Chamber of Commerce and Industry, Mr. Narciso Casado – General Manager for International Development at the Spanish Confederation of Employers’ Associations, Mr. Gheorge Seculici – Vice President of the Chamber of Commerce and Industry of Romania and also a significant number of companies from Romania and Spain.

During the B2B meetings organized on this occasion, the General Manager of AUTONOVA, Mr. Cristian Dalis SUTEU, held talks with several Spanish companies activating in industrial businesses, which were interested in getting in touch with our company. During the Motortec Automechanika Madrid International Fair, representatives of these companies, also made visits to our own stand that we had at this trade fair.

The participation at the Motortec Automechanika Madrid International Fair and at the Romania-Spain Business Forum is part of the AUTONOVA business internationalization and development strategy, on a platform for diversifying the customer base and expanding our new partnerships.