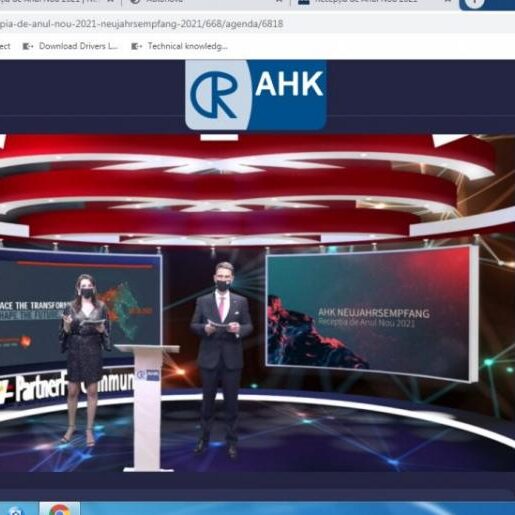 The German-Romanian Chamber of Industry and Commerce (AHK Romania) organized on the 28th of January, in exceptional conditions, in the online environment, the traditional New Year’s Reception, an event of relevance at the beginning of each year for the entire business community from Romania.

As a member company of the German-Romanian Chamber of Industry and Commerce, Autonova was represented at the reception by Dr. Ciprian Dan COSTEA, Vice Chairman of the Board of Directors. During the event there were presented messages by His Excellency Mr. Klaus Iohannis, President of Romania, by Dr. Dragos Anastasiu, President of the German-Romanian Chamber of Industry and Commerce, by Mr. Sebastian Metz, General Manager of AHK Romania and by His Excellency Cord Meier-Klodt, the Ambassador of the Federal Republic of Germany in Romania. A special moment was the intervention of the famous international speaker, Ron Kaufman! Subsequently, virtual meetings took place between colleagues and participants in the event.

Germany is Romania’s main trading partner and the German-Romanian Chamber of Industry and Commerce (AHK Romania) officially represents the German economy in Romania. As a bilateral Chamber and member organization, it represents the interests of Romanian and German companies, as well as those of members in front of public authorities, thus being a central actor in the development of Romanian-German economic relations.